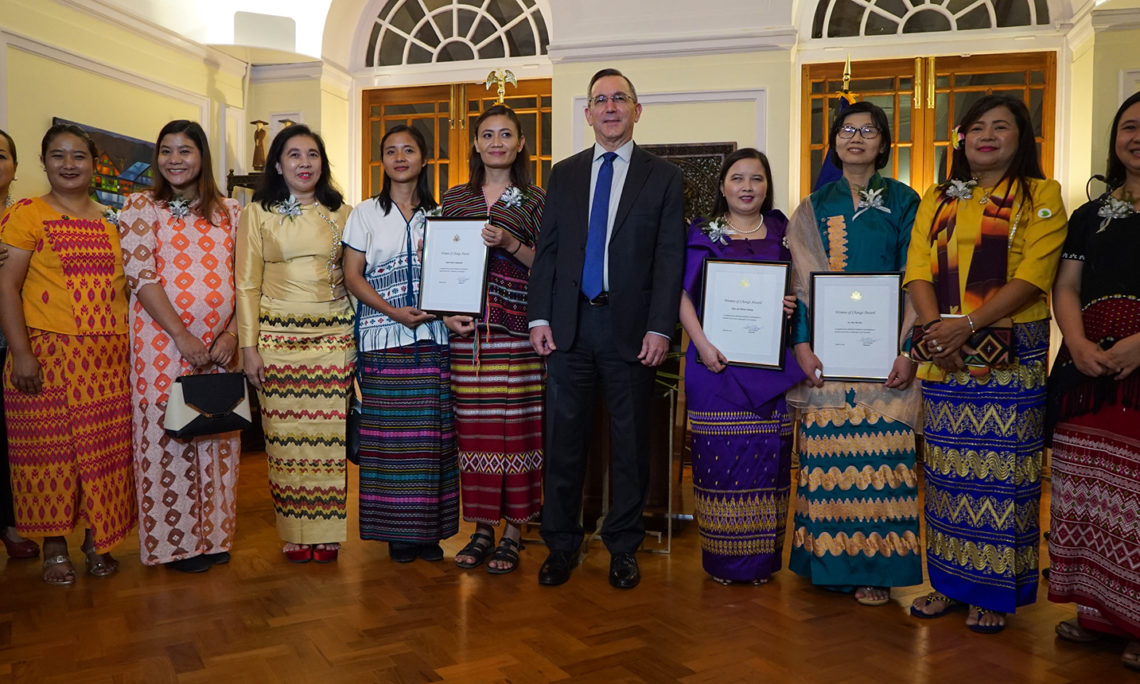 Yangon, Myanmar – Ambassador Scot Marciel congratulated three recipients of the annual U.S. Embassy Women of Change Award today.  This award recognizes women whose work advances the rights of all people in Myanmar and demonstrates the U.S. commitment to the role of women in public life in this country.

“The United States is committed to supporting people in Myanmar who are working to improve peoples’ lives and advance human rights.  The Women of Change Award is one way that we recognize the incredible work that so many women in Myanmar do,” Ambassador Marciel said.  He added that this year’s recipients took risks to do things that were controversial, difficult, or dangerous; they stood up for under-represented communities; and they solved problems creatively.

Karen Women’s Organization (KWO):  The KWO comprises over 60,000 members supporting gender equality, indigenous people’s rights, and women’s voices.  This year, the U.S. Embassy commends the KWO for its brave stance against the violence against all civilians in Rakhine State and throughout Myanmar, and for its strong commitment to peace and democracy.

Aye Thinzar Maung:  As an Executive Committee Member of the Myanmar Federation for Persons with Disabilities, Aye Thinzar Maung advocates for government reforms to support full participation of people with disabilities.  She played a leading role in working with the Ministry of Education to change university admissions guidelines that now ensure that people with disabilities have equal access to higher education.

Dr. Thet Thet Mu:  The Deputy Director General for Health Information at the Ministry of Health and Sports is a champion of evidence-based policy making.  She led Myanmar’s first-ever Demographic and Health Survey, a three-year, multi-million dollar effort supported by the United States and other donors, and used ground-breaking engagement in conflict-affected and disputed areas to ensure that policy-makers better understand inequality within topics such as health access, nutrition, and vaccination coverage.

The U.S. Embassy presented this award for the first time in 2017, when it was given to six recipients working on public health, rule of law, peace, natural disaster response, and environmental conservation.  The United States supports women leaders across many sectors in Myanmar, including dozens of grants through USAID and the U.S. Embassy to women-led civil society organizations as part of our broader focus on women’s participation.