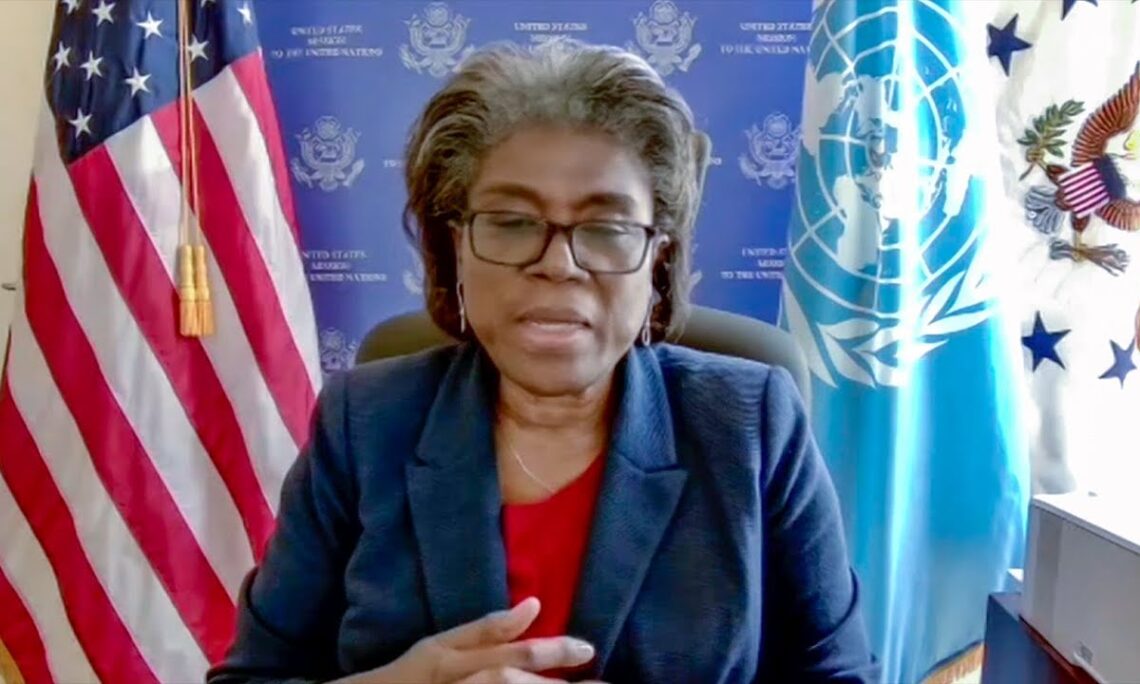 Thank you, Barbara. And let me just start by expressing – adding our voices, as others have, to expressing condolences on the passing of Prince Philip. And we send our sympathies to the Royal Family and to the people of the United Kingdom. Let me thank you, also, for calling today’s meeting. And thank you to all of the briefers for your comments and your insights today. They were particularly poignant, given the situation there.

Every day, Burma’s security forces continue to kill people – including children far too young to even know what a protest is. And unfortunately, this open conversation can’t be seen by those whose views are most important – the people of Burma themselves. The military has blacked out their internet. By cutting its people off from the outside world, the military seeks to conceal its terrible actions, and stifle protest, and unleash even more horrors with impunity. And we cannot allow them to succeed.

So, to the people of Burma, if you can see this or hear this – and certainly our briefers can – I want you to know that the United States stands with you. And we will do everything in our power, in coordination with our allies and our partners, here in the Security Council and elsewhere, to help you deal with this terrible situation. And truly that does start here in the Security Council.

We’re proud that, despite our differences, the Council has spoken with a strong, and with a clear, and a unified voice on this issue. But every statement the Council has made has been followed by further violence by the military against the people of Burma.

Statements alone are not enough to stop the military from threatening the security of the region, either. Already, we’ve seen thousands of individuals flee Burma into Thailand amid airstrikes on Burma’s eastern border. And hundreds of individuals – hundreds – have tried to flee into India from northwest Burma.

Three years ago, we saw how quickly the military’s brutality sparked the displacement of hundreds of thousands of people across international borders. And I say categorically, we cannot – we simply cannot – allow the military to destabilize the region once again through its unrelenting campaign of violence, their campaign of repression, and especially – especially – against the backdrop of an unprecedented global pandemic. So, we can all clearly see how this crisis falls squarely within the Council’s mandate.

At this point, only concrete action will change the military calculus. And I have to say, that action can take many forms. Several on this Council have already taken important steps to promote accountability for the military and to pressure it to reverse its dangerous and abusive behavior. One of our speakers actually made a point that we needed to take those kinds of actions more deliberately. These steps include sanctions against the military, its holding companies, and anyone who seeks to profit off the violence. They include maintaining an arms embargo on Burma. And they include ensuring that members of the military who engage in atrocities and other abuses against their own people will be held to account.

No matter what actions we take as a Council, we must insist that military authorities allow the UN Special Envoy to visit Burma without preconditions. And we heard from her today that they have turned down her visit. She needs unimpeded access to civil society activists and pro-democracy leaders, including State Counselor Aung San Suu Kyi, as well as President Win Myint.

And finally, we strongly support ASEAN and countries in the region taking a leading role in calling for a resolution to this crisis and a restoration of democratic transition. We support an emergency ASEAN summit, and we encourage ASEAN members and all other countries to review their financial and other linkages to the military. The military needs to feel the costs associated with its horrific actions. The stability and prosperity of the region depends on swift action.

The military has ignored our condemnations, posing a test for the Security Council. Will the Council quibble over language in yet another statement? Or will we act to save the lives of the Burmese people? Will we allow the military to destabilize the region, plunging Burma into further violence and chaos? Or will we hear the calls of the people of Burma, and help them achieve the free, open, and peaceful country we all know that they deserve?

To me, the answer is clear. We have to act.