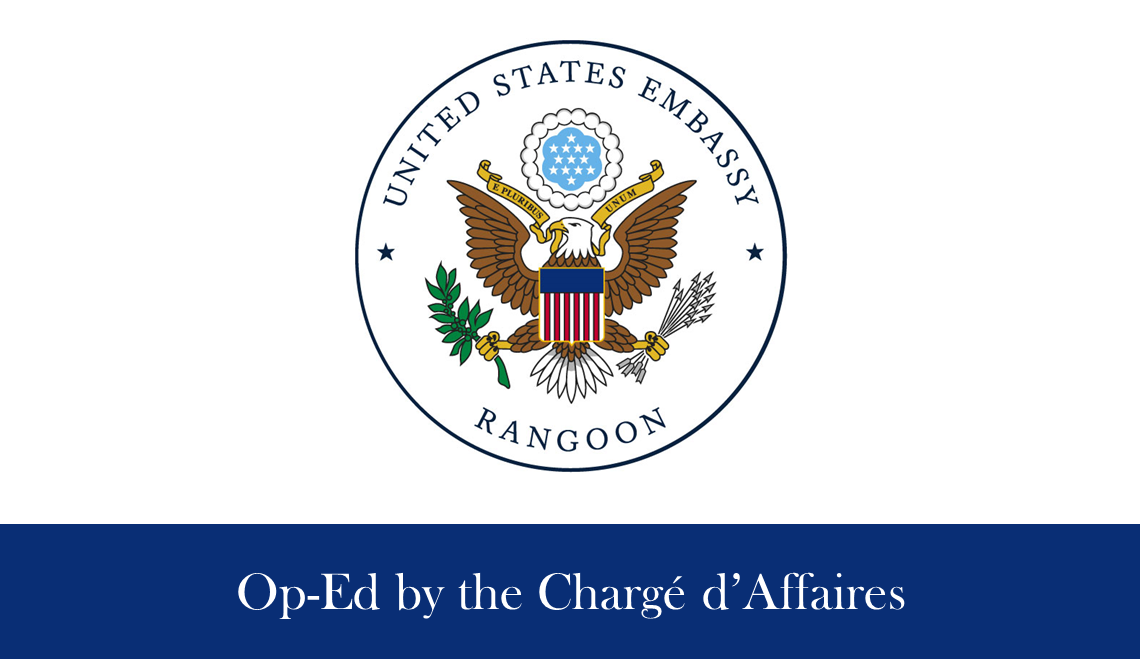 How the Erosion of Sovereignty Elsewhere Impacts Myanmar at Home

This Op-Ed was originally published by Irrawaddy News on July 18, 2020.

As Myanmar has focused on the fight against COVID-19 in recent months, many of its friends, including the United States, have offered support. But troublingly, at this time of shared struggle across the world, the People’s Republic of China has continued its crackdown on democracy and disrespect for other nations’ sovereignty.

As governments responded to the twin calamities of the pandemic and its economic fallout, China aggressively cracked down on the independent, democratic spirit of Hong Kong, breaking a promise it made only 20 years ago.  The PRC also continued its unprecedented campaign to undermine the sovereignty of ASEAN countries in the South China Sea. For Myanmar, these disputes may seem far away, but Beijing‘s actions there are part of a larger pattern to undermine the sovereignty of its neighbors. China’s actions in Hong Kong and the South China Sea alarm the United States and our friends and allies because these kinds of actions—breaking promises, ignoring the well-being of smaller nations, rewriting history—can happen anywhere.

At the June 26 ASEAN Summit, Southeast Asian leaders issued a strong statement that territorial disputes in the South China Sea must be resolved in line with international law. The United States has a deep respect for all ASEAN countries, including Myanmar, and welcomed this statement that upheld the fundamental principles of the rules-based international system that undergirds the security and sovereignty of all nations. Four years ago, the South China Sea Arbitral Tribunal rejected Beijing’s maritime claim as a violation of international law. Despite this—and with limited or no consultation with ASEAN claimants—China has deployed arbitrary fishing bans and harassed ships in the South China Sea. It has continued to block ASEAN countries from accessing resources off their coasts, including vast reserves of oil and gas and some of the world’s richest fisheries—the very livelihood of millions who call Southeast Asian coastal communities home.

These events are taking place far from Myanmar, but the PRC has used similar behavior to intimidate, threaten, and undermine Myanmar sovereignty closer to home. Instead of demarcating fisheries, it takes the shape of unregulated banana plantations in Kachin State that thrive on forced labor and damage the environment. Instead of spurious maritime claims, it takes the shape of unregulated investment and corruption in the mining and forestry sectors. Instead of island building, it takes the shape of infrastructure projects and special economic zones that pile on debt and cede regulatory control, and benefit China far more than they do the people of Myanmar. This is how modern sovereignty is often lost—not through dramatic, overt action, but through a cascade of smaller ones that lead to its slow erosion over time.

The United States stands as a partner to Myanmar and ASEAN on issues that matter to the people of Myanmar and to the countries of this region: improving health, strengthening democratic institutions, combating illicit narcotics, and promoting responsible business and investment practices that can contribute to sustainable, inclusive economic development. To help develop and strengthen economic opportunities for the people of Myanmar, the United States supports transparent, consultative processes that include the voices of local communities and that put economic prosperity and power back in their hands.

Far too many young Myanmar people fall victim to the scourge of illicit narcotics and the violence it inflicts on communities. The United States partners with Myanmar law enforcement to strengthen their capacity to investigate and prosecute criminals involved in the production and trafficking of methamphetamine and other drugs. This equipment and training have led directly to the seizure of billions of dollars of drugs, precursor chemicals, and drug production equipment, most of which came from China. The U.S. support contributes to healthier communities in Myanmar and across the broader region.

Far too many young Myanmar women are duped with the promise of high-paying jobs or husbands in China, only to be sold to human traffickers who exploit them for labor and sex. Nearly 80 percent of Myanmar’s reported human trafficking cases in 2019 involved women being trafficked to China. Law enforcement in China often looks the other way and fails to help these vulnerable victims. The United States continues to partner with Myanmar authorities to strengthen Myanmar’s capacity to prevent human trafficking,

investigate and prosecute trafficking-in-persons crimes, and protect victims. Our law enforcement assistance on illicit narcotics and trafficking in persons is helping Myanmar stand up to transnational organized crime and protect future generations.

Far too many in Myanmar are being hurt by the rapid environmental destruction caused by corruption and poorly regulated investments. The land disputes and land contamination from the controversial China-backed Letpadaung copper mine illustrate the implications for everyday people of ceding control to foreign actors for short-term economic gain. Corruption and lack of regulation result not in economic development of disadvantaged communities, but in harm to people and devastation to the environment. The United States is supporting Myanmar’s efforts to become a full member of the Extractive Industries Transparency Initiative, to shed light on the ownership of natural resources. The United States also supported the Myanmar government’s efforts to hold public consultations with all local stakeholders in drafting a gemstone policy. Both efforts put the Myanmar people first.

Whether in the South China Sea, in Myanmar, or elsewhere, the United States joins ASEAN nations in calling for a free and open rules-based order. When negotiating energy, communications, or transportation infrastructure projects, Myanmar benefits when it is not burdened by unnecessary debt or exploited for strategic gain. Together our voices can strengthen the sovereignty of every nation, as we work to build healthy communities, increase sustainable economic development, and expand trade and investment ties in ways that benefit the people of our countries. The United States supports ASEAN in standing up to Beijing’s troubling foreign policy and economic practices, just as for more than 70 years the United States has stood as a friend and partner to the people of Myanmar.

George N. Sibley is Chargé d’Affaires at the US Embassy in Myanmar.