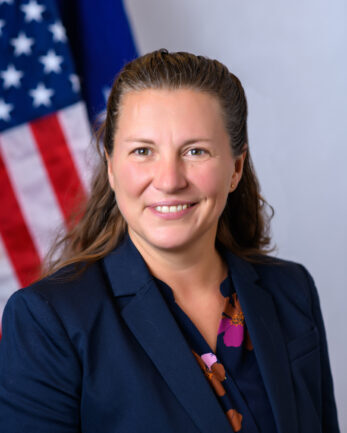 Deb Lynn assumed her duties as Chargé d’Affaires to U.S. Embassy Rangoon in December 2022 after previously serving as the Embassy’s Deputy Chief of Mission from October 2021 to December 2022 and Public Affairs Officer from August 2019 to November 2020.

Deb has also served as a Senior Advisor in the Office of Policy, Planning, and Resources of the Under Secretary of the Bureau of Public Diplomacy and Public Affairs. There, she mentored and coached Public Diplomacy Officers around the globe on strategic planning and implementing the Public Diplomacy Staffing initiative.

In addition, Deb served as the Deputy Director of the Africa Office at the Bureau of Conflict and Stabilization Operations from April 2016 to January 2017, then as Acting Director until April 2018. Other overseas diplomatic assignments include managing public diplomacy programs in Indonesia, Kabul, Afghanistan, and Russia. She was also detailed to the International Staff at NATO headquarters in Brussels, Belgium to serve as the Senior Media Operations Officer for Afghanistan Issues. In Washington, she managed the press and outreach functions of the State Department’s refugee bureau. Additionally, she served consular tours in Tbilisi, Georgia; Kyiv, Ukraine; and Frankfurt, Germany. She is proficient in Bahasa Indonesia, Russian, and German. She has received the Department’s Superior Honor Award four times.