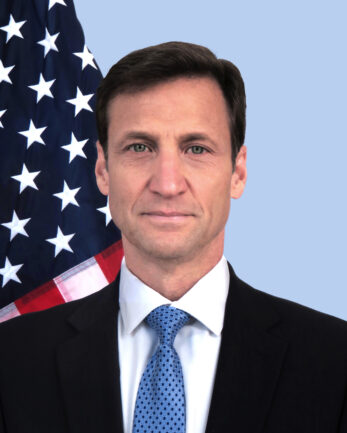 Mr. Vajda most recently served as Senior Advisor in the Bureau of South and Central Asian (SCA) Affairs, overseeing U.S. policy towards and relations with the countries in the region.

Mr. Vajda joined the Foreign Service in 1991 and is a career member of the Senior Foreign Service with the rank of Minister Counselor.  He has served overseas in Northeast and Southeast Asia, Central Europe, the Balkans, and at the State Department headquarters in Washington, D.C.  Prior to Mumbai, his previous postings included Deputy Chief of Mission in Myanmar, Director of the Middle East Partnership Initiative, and Deputy Coordinator for Assistance to the Middle East.

Mr. Vajda holds a Bachelor’s Degree from Stanford University and a Master’s Degree from the Fletcher School of Law and Diplomacy at Tufts University.  He is married to Amy Sebes, and they have two daughters.