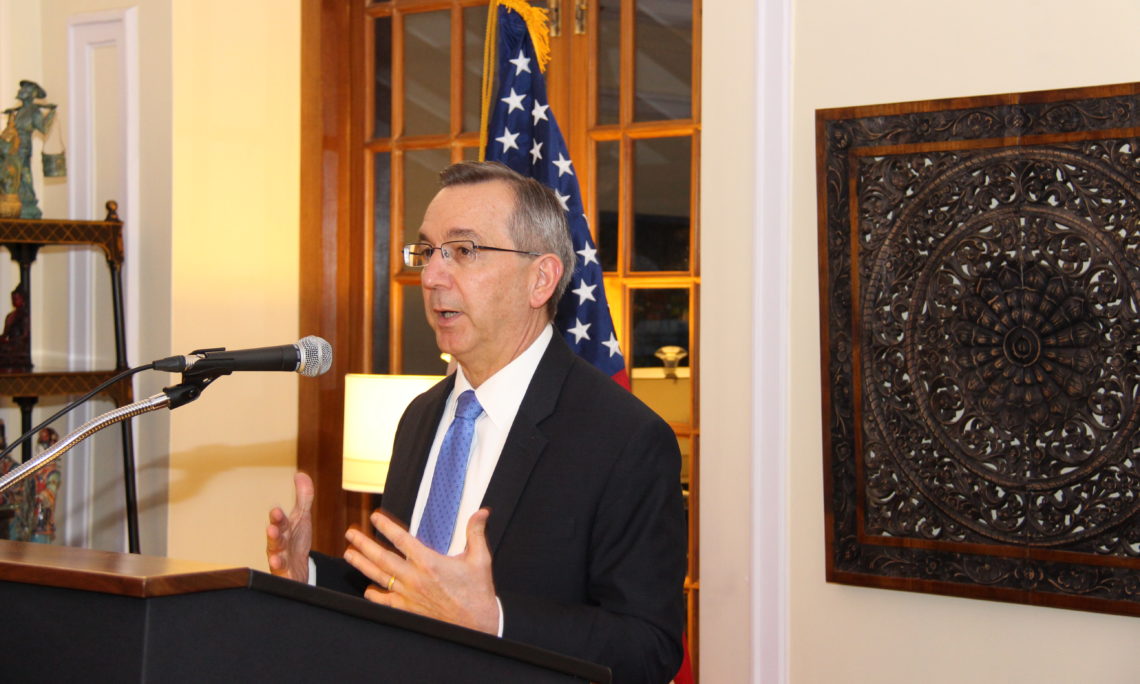 Welcome to all of you. Thank you so much for coming this evening.

I know World Press Freedom Day was a few weeks ago, so I apologize; we’re commemorating it a little bit late. But we’re doing it even a little bit late because it’s really important. So we asked ourselves, “Why should we have an event this year for World Press Freedom Day in Myanmar?” I’m sure all of you will have better answers to that question than I do. But for me, it’s simple in a way. We really admire how much the people of this country have sacrificed and how hard they have worked to try to build democracy and freedom. And we also know that in the last 10 years Myanmar’s made a lot of progress, but I think we agree that there is still a lot of work to do. Building democracy requires a lot of things: laws, elections, a good justice system, and much more. But we believe that freedom of expression, and specifically a free independent press, are essential cornerstones of democracy and accountable rule.

More than 200 years ago, one of our Founding Fathers, Thomas Jefferson, said, “Our liberty depends on the freedom of press and that cannot be limited without being lost”. And why is free and independent media so important for democracy? First of course, people need to have accurate and independent sources of information if they are going to participate in the democratic process. Second, it’s a free and independent press that speaks truth to power. It’s a free and independent press that ensures that the actions of the powerful are rigousorly examined and when necessary, questioned. Third, a press, a free press, is essential to hold leaders accountable. For example, how do you fight corruption if the press isn’t free to report on corruption? We know that free and independent press is under challenge and even under attack in many places around the world these days. And in Myanmar, while there is a lot more press freedom than there was a decade ago, the past few years have seen a troubling series of actions against journalists that should concern everyone who cares about democracy and accountability.

Many journalists, including some of you in this room, have been arrested, prosecuted, and imprisoned based on laws – some from the colonial era, some from the military era, and some more recent – that many of my Myanmar friends believe are not consistent with democracy. You all know [Section] 66(d), the Unlawful Association Act, some of the Penal Code articles like [Section] 505 and other laws are being used to detain and intimidate the press. And you know better than I the press is also facing huge challenges to survive financially these days, and by the way that is not only true in Myanmar but that’s true around the world. But it’s a particular problem in a place like Myanmar where the government media operates with what many would consider an unfair, competitive advantage. So the press is facing huge challenges here. But the good news is there are people like you, a lot of people like you, who are very courageously and I think very effectively working to ensure the continued operation of an independent and free media in Myanmar.

I’m very aware of the challenges, but I’m also very aware the fact that every day I can and I do read really interesting, often quite critical articles in the media. So the work – in our view – the work that you are doing is absolutely essential to Myanmar’s ability to build a stronger democracy and more just nation. There is a long list of really courageous and good journalists that if we have the time I would love to read out. But tonight I am just going to mention two: Wa Lone and Kyaw Soe Oo can’t be with us tonight because they are in the United States to receive a Pulitzer Prize for their extraordinary work.

Last thing I’ll say:  that after three years in your country, I am reminded every day of the enormous challenges that Myanmar still faces but I’m also reminded every day of the extraordinary people of the country, who – people like you in journalism and other fields – who are working so incredibly hard and with so much courage to build a brighter future. Tonight is just a small opportunity for us to share with you our great admiration for the work that you’re doing and our pledge of continuing strong support for a free and independent media of Myanmar. I thank you again for taking time to join us this evening.