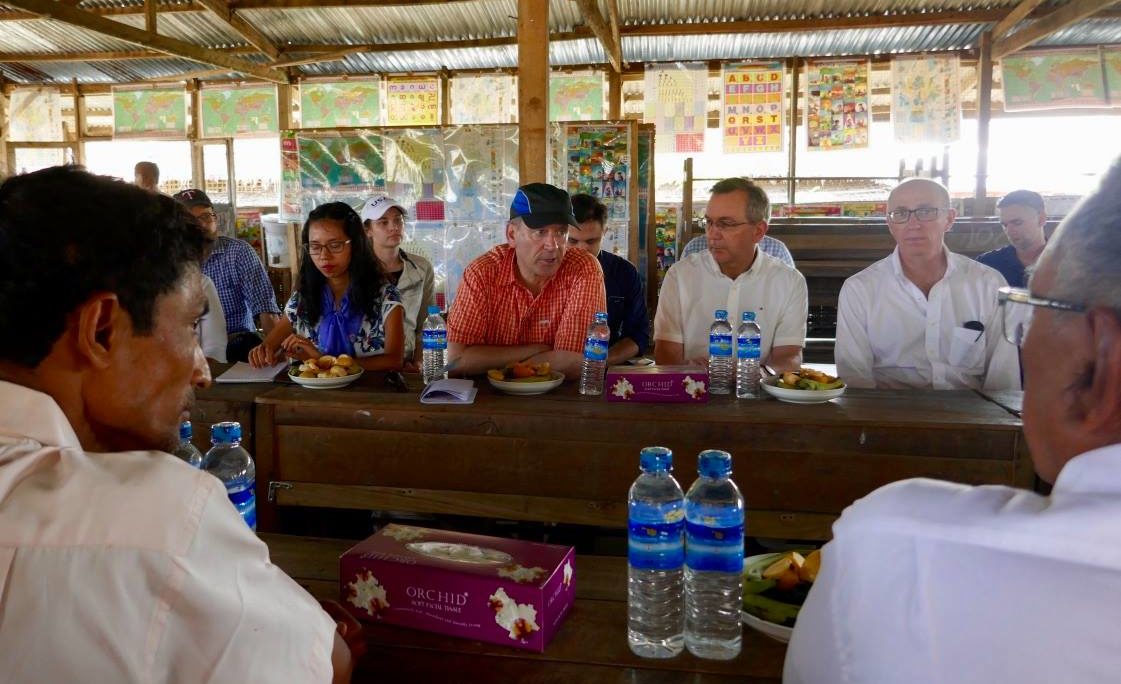 QUESTION: What did you see up in northern Rakhine?  What are you going to report back to Washington?

And it’s interesting, the State Counsellor has said that she supports voluntary, safe repatriation of the Muslims back to Rakhine, and what we’ve been urging all of us — and I think she agrees — the best way to encourage repatriation is to demonstrate how serious they all are in creating those conditions.  Well, I would suggest in Northern Rakhine, that’s obviously a great place where it could be done. So, there is an opportunity here, and where we were this morning, to show seriousness of purpose to make sure that Muslim families and their children can go to school, that they have freedom of association, that they have the right to move around, that they have access to good healthcare, and that they’re not dependent upon the generosity of donors.  So that, it seems to me, is vitally important. It’s the best way to move forward.

QUESTION: I’ve spoken to a lot of people from the international community here, UN representatives and other INGOs who — one of their concerns that they raise is that they basically have no visibility as to the government’s bans whether in Central or in Northern Rakhine.  Do you see that as a problem and is that something that we think is important in terms of just communicating between the governments?

ADMINISTRATOR GREEN: Well, and I’ll let the Ambassador answer much of that.  First off, I don’t want to go any further without pointing out something that’s important.  They’ve given us access here. And so, we’re thanking the government for the access they’ve given us here and where we are earlier today, and that’s great news, and we’re deeply appreciative because it gives us the chance to see things with our own eyes and to talk with people.  And so, I think that that’s very important. What I can say is here, there’s a lack of clarity about what lies ahead. There simply isn’t enough communication about what the plans are, what the future holds, and we know that where there isn’t clear communication and where there isn’t certainty, that naturally gets filled with people’s worst fears.

And so, again, once again, we keep coming back to it.  It seems to me the most important thing that the government can do in the weeks and months ahead is to take concrete steps to show its seriousness of purpose.  We have heard that they support the Kofi Annan’s recommendations. Implement them.  Concrete steps that can show seriousness of purpose and goodwill, I think would be something that we’d all like to see.

QUESTION: But you’re here, to a certain extent, to see whether this place is safe and suitable for people to return to.  What’s your verdict?

ADMINISTRATOR GREEN: Well, again.  I’m seeing but limited places.  What I can say that I’ve seen, where I was earlier today, is clearly, young Muslim families confined, not having freedom of movement, not having access to free education, not having access to food other than what is given to them through donations, and that clearly is no way to live nor is that a sustainable answer to the future.

QUESTION: It seems like one of the key issues that has been raised throughout this trip is the pathway to citizenship or some sort of form of resolving the statelessness of the Rohingya.  What have you learned about it and what do you have to say on this particular matter?

ADMINISTRATOR GREEN: Well, first, a couple things.  Once again, clarity and communications would be tremendously helpful because we’ve heard different things from different people; Muslims in this country who are completely uncertain and afraid of what they’re status is.  What is disturbing is we have some who have been citizens, whose parents were citizens, whose grandparents were citizens, who are now being asked, in their minds, to take documentation which makes them something other than citizens and limits their ability to move, limits their rights, and in my view, that’s a step in the wrong direction, obviously.

QUESTION: In terms of the sights and the sounds of this place, are there any images, are there any people’s stories that are going to leave a lasting impact in your mind?

ADMINISTRATOR GREEN: Yeah.  So, just a few moments ago, when we sat in that gathering room, I sat across the table from a young father who asked for his kids to be able to go to school.  That’ll be it.

QUESTION: There is a school here, I believe?

ADMINISTRATOR GREEN: Well, so there are projects underway, being led obviously by the local team in an effort to — and I’ll let you characterize it — to build confidence and try to build strong relations among communities and to enhance community cohesiveness, and certainly those are positive steps.  Again, my fear is that we have to offer hope to people. The people have to believe that there is something coming that is better than today.

AMBASSADOR MARCIEL: Well, I would just add that, you know, what we in the United States and others in the international community can do is try to help and assist and support, and that’s what we’re doing, for example, where we visited today.  Trying to support small development projects in both communities, not just one community. Trying to show that people can benefit from different communities. There’s a lot of poverty on all sides here and we want to help promote development and a better life for everyone.  But what’s striking is the Administrator said one community is quite poor. The other community is poor, but also, is not allowed to move or have access to education or healthcare.

And so, there’s, you know, several problems that need to be resolved, and we want the State of Rakhine to prosper and avoid the violence and instability of the past.  And the way there, the way forward, we think, is to try to help all the communities here; at the same time, try to achieve a better livelihood. But the onus has to be, of course, on the Myanmar authorities.  We can support, we can help, but it’s the Myanmar authorities really who have to drive this.

ADMINISTRATOR GREEN: There’s one last thought, because I think we sometimes overlook this.  I think we really also need to salute the mostly young men and women who are here implementing partners from the donor community, from the UN community, who’ve done a fantastic job.  They’re working hard. They’re working to lift lives. They’re working to express humanity and we really owe them a debt of gratitude. I’m very impressed. It’s hot today; we’re all sweating bullets.  These men and women just do great work under trying conditions. They have the face and voice of the rest of the world and thank God for what they do.

McCLESKEY: We’re going to leave it there, but we’ll do on the record —

AMBASSADOR STORELLA: Could I have one small point which is when we think about returns of refugees anywhere in the world, a leading indicator is what’s going on with the population that remains behind, who also could be internally displaced.  The stories of what’s happening with them will make their way to refugee camps outside the country, and so the treatment of the internally displaced and the populations that are here is really important. The kinds of things the Administrator spoke about in terms of access to education, access to service, freedom of movement.

Those kinds of things can make a tremendous difference in making eventual returns of refugees possible.  I want to just say one last thing. We also had the opportunity to visit, as the Administrator said, with both communities.  When we asked them about what things they wanted and what kinds of projects would be valuable to them, I was struck that they said roads would be valuable.  They want to be connected.